Fiberoptic solutions are ideal for the reliable transfer of light or signals within a confined space. Depending on the application and ambient conditions, glass- or synthetic fibers are used for light transmission in the visible but also in the UV or NIR range. Fiberoptic solutions excel through their flexibility, durability and resilience.

SCHÖLLY manufactures fiberoptic components according to customer drawings or develops the optimum solution for customer’s tasks. We offer the whole program from one source: From the choice of the appropriate fiber, to the construction of an assembly, to the completion of a prototype, all the way to series production: Our own optical design and production enables a combination with appropriate optics and micro optics. The connection to camera technology is also possible.

Get in touch with us. We are pleased to advice you about the possibilities of your application. 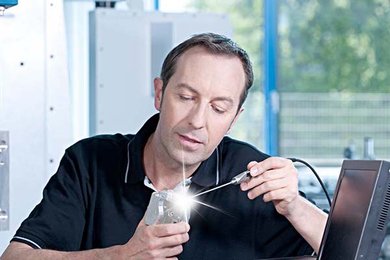 Do you have any further questions about the product?

We would be happy to advise you personally or just send us a message to visual-inspection(at)schoelly.de

With fiberoptic sensors a measured value is transferred not as an electrical signal, but as an optical one by using glass fibers. Fiberoptic sensors offer advantages over electric sensors: As no sensitive electronics are used, they can be utilized at high temperatures, with aggressive ambient substances or in electro-magnetic fields. They stand out for their robustness and reliability. Due to their small construction design they can be built in under confined space conditions. SCHÖLLY develops and manufactures components for fiberoptic sensors according to customers’ specifications and adapts them to the given installation situation.

SCHÖLLY’s assemblies are used, for example:

In addition to the standard program, SCHÖLLY provides customer-specific fiberoptic components, such as for example focused illumination systems for image processing or fiberoptic light solutions that are integrated into a special housing shape.